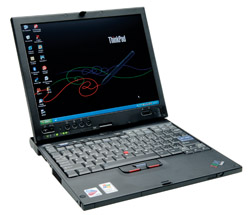 To some, the Tablet PC operating system ranks right up there with Microsoft Bob, Clippy the Office Wizard, and Steve Ballmer as one of Microsoft’s most obnoxious, useless creations. The IBM ThinkPad X41 Tablet is unlikely to change the minds of the haters. But for more open-minded folks, the X41 shows that it is possible to make a tablet that’s usable, functional, well built, and even attractive.

Granted, IBM is late to the tablet game, and the X41 may not break the Curse of the Tablet: high prices, slow sales, and general public apathy. But IBM has clearly been watching and learning from the missteps of earlier tablet manufacturers.

For starters, the X41 Tablet doesn’t look goofy, and it’s not flimsily put together. At first glance, it’s black, serious, and a bit on the dull side — a typical ThinkPad. The keyboard is stiff and slightly cramped, but solid. The swiveling hinge is the first hint that something’s different. Spin the screen around, fold it back, and the notebook converts to a slab. Tablet-specific controls, including scroll and rotation buttons, line one side of the 12.1-inch screen’s bezel. And the X41 is light, tipping the scales at just over 4 pounds (4.9 pounds with the charger), although its lack of an optical drive is a big drawback.

The display is where the X41 really stands out. Though it’s small, the screen is clear and has remarkably wide viewing angles in all four directions. This is what makes us miss the optical drive more: Watching DVDs on this sweet screen would have been great for cross-country flights, especially since you can lay the tablet flat so that it doesn’t get crushed by the lummox in front of you when he reclines his seat all the way back. The screen also has just the right degree of friction for comfortable onscreen writing and scribbling with the stylus.

In one corner of the display is the X41’s other secret weapon: A fingerprint scanner. IBM’s security software makes short work of scanning your fingertips and then, optionally, tying them into the Windows login. It works well, correctly identifying you with just one or two swipes of your finger and denying access to your evil nemeses.

The X41’s performance is decent for a tablet, with a middling Sysmark score of 134 and a surprisingly good Unreal benchmark score of 60.4 fps. Not that you’re likely to take it to any LAN parties — but if you did, the X41 would at least let you stay in the game.

Honestly, though, this is a tool for browsing the web, reading e-mail, and taking notes, and for that, it’s a dream machine. The icing on the cake is its five-plus hours of battery life, enabling the X41 to go the distance on most jobs — unless you’re taking notes at a Castro speech or trying to work all the way through a flight to New Zealand. Add in the great screen, security, and performance, and you’ve got a machine that’s a pleasure to use as a tablet and as a more conventional notebook. If it were about $300 cheaper, we’d love it all the more. -Dylan Tweney