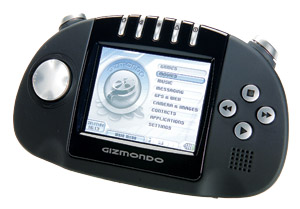 With a gaming market utterly dominated by the Sony PSP and the Nintendo DS, the odds of an independent console making it are slim at best. Sure, the Gizmondo has a great design; loads of features; a popular, extensible operating system; and the support of lots of game developers, including powerhouse Electronic Arts.

Unfortunately, all that won’t guarantee success. Just ask Tapwave, whose Zodiac fizzled out this year despite having an excellent design; loads of features; a popular, extensible operating system; and the support of lots of game developers, including EA.

That said, we wish the Gizmondo luck. Competition for the PSP and the DS? Bring it on. Better second-generation consoles? Hell, yes. Price war? We can only hope!

Based on the preproduction unit we tested, the Gizmondo has a lot going for it. It’s well designed and fits comfortably in two hands. On the back is a camera capable of snapping camphone-quality images.

The 2.7-inch LCD is even smaller than a Game Boy Advance’s, but it’s very bright and clear. The Gizmondo plays Windows Media video files but chokes on AVI and MPEG videos. It also plays MP3 audio, and while the tiny speaker is crummy, playback through headphones is excellent. Getting video and audio on the device is as simple as copying files to the SD card (in stark contrast to the PSP). Unfortunately, playback controls are a little clunky, and using the onscreen volume control obscures the video you’re watching. There’s also no hold switch to prevent accidental button-pressing. The battery lasted for two hours and 49 minutes of continuous video playback.

The Gizmondo has GPRS data capability, so it can exchange SMS messages and e-mail as well as browse the web via compatible cellular networks. The preproduction unit we reviewed did not have GPS capabilities, but this feature will be included when the final version ships in August. The Gizmondo connects to your PC via USB to sync Outlook contacts, but there’s no calendar function.

But the Gizmondo really stands out as a gaming platform. Its controls are simple and ergonomic. We tested it with a variety of racing and puzzle games, and found that it was eminently playable. Tiger Telematics says that developers have lined up to create 90 games for the platform.

What’s more, the GPS and integrated camera give those developers opportunities for real innovation. In one demo shown at the Electronic Entertainment Expo, the camera was used to sense motion, so you could look around in the game by moving the unit up, down, or around. Future games may also use the camera and GPS to superimpose virtual objects over real places — such as ghosts in Central Park or a spaceship over the Statue of Liberty, which you could see only through your Gizmondo.

Despite some rough edges in the preproduction model, the Gizmondo is promising and innovative. Tiger Telematics has even held the cost down creatively by slashing the price for customers willing to receive three ads per day on the unit. But lacking the PSP’s huge screen and the DS’s enormous game library, the Gizmondo is, unfortunately, a long shot. -Dylan Tweney