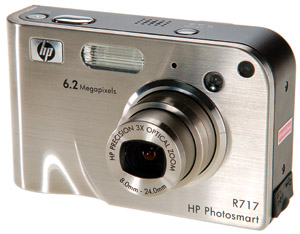 HP has figured out how to make excellent, user-friendly cameras, and it’s not messing with the formula. We liked last year’s HP Photosmart R707, a 5.1-megapixel camera with a virtually identical weight and profile. The Photosmart R717 adds another megapixel of resolution, a slightly bigger LCD, and kicks the image quality up a notch. The result is a capable, economical, no-compromise camera that takes great pictures in nearly all conditions.

The R717 has a somewhat unusual, inelegant, two-tone design, with a brushed-metal front curving around to a dark gray back. Its controls are simple and intuitive, with two fewer buttons than the already-minimalist control panel of the R707. Yet the R717’s buttons and simple menus provide easy access to a wide range of features, from white balance adjustment, exposure adjustment, and even autobracketing, so you can shoot three quick shots with slightly different exposures.

There’s even a manual-focus mode, although it’s difficult to set the focus very accurately using the pixelated image on the R717’s LCD. A mode button on the top of the camera provides access to a dozen useful preset modes for taking action shots, sunset photos, photos of documents, and so forth. A handy “museum” mode turns off the flash and all sound effects for when you need to be unobtrusive.

The R717 is fairly speedy, with a respectable 0.2-second shutter lag and 2.9-second shot-to-shot recovery time. It takes almost 5 seconds to power up and take the first shot, however. But where the R717 really shines is in image quality, indoors and out. We were astonished by its ability to snap indoor shots with the flash off; it captured photos with greater clarity and color than any other camera without built-in image stabilization.

In short, the R717 is a top-notch camera that doesn’t require a PhD to operate. We recommend it to anyone. -Dylan Tweney