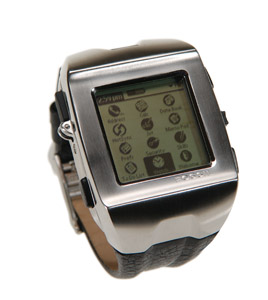 It was inevitable that someone would eventually try to cram a Palm PDA into a wristwatch. And finally, after many delays, Fossil has done it.

The Fossil Wrist PDA is a huge, gleaming chunk of metal and LCD that balances on your wrist about as elegantly as an elephant on a pogo stick. Its nearly 4-ounce weight is tiny for a PDA, but for a watch it’s positively monstrous. Unless you have Schwarzenegger-size forearms, this watch is going to make you look like a puny, twig-armed geek — and let’s face it, that’s probably who’ll most likely wear it, anyway.

As a watch, the Wrist PDA has several shortcomings. The display is dim, the numbers are not very legible, the alarm is absurdly quiet, and the backlight merely turns the black-on-gray screen into faintly glowing white on blue. What’s more, the battery lasts for only two or three days, and if it runs down completely, everything — apps, contacts, data files — is gone.

Granted, as a PDA the Fossil is an impressive feat of miniaturization. It’s the smallest Palm OS device we’ve tested. It even runs applications such as AvantGo and Kinoma, although you’ll need sharp eyes to read much on its tiny screen.

You can enter data on the Wrist PDA’s screen using the included Jot utility, although the tiny folding stylus (stored in the wristband buckle) is annoying and goofy.

For geek cred, the Fossil Wrist PDA is top drawer. Sadly, it’s too bulky to be attractive and its screen is too tiny to be effective, and the lack of a backup battery is unacceptable.
-Dylan Tweney

Best Feature Impressively tiny size for a Palm PDA
Worst Feature If the battery dies, it takes your data with it