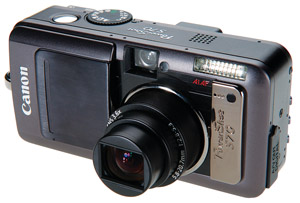 So you fancy yourself a serious photographer, but you don’t want to carry a big SLR or a bulky enthusiast camera? The Canon PowerShot S70 is made for you.

It’s fairly chunky, and at 10.8 ounces it’s on the heavy side. But the PowerShot S70’s solidly built, dark gray, metallic body conveys a sense of solidity and seriousness, and it feels good in the hand. The sliding lens cover protects the optics while you’re traveling, and it doubles as a power switch.

The S70 has a daunting array of buttons on its back face, but its mysteries will reveal themselves in short order to the dedicated photographer. The function button provides quick access to the most-used creative features, including exposure compensation, drive mode, ISO speed, and special effects such as black-and-white or sepia-toned shots. Want to go further under the hood? The menu button lets you control such nitty-gritty details as flash synchronization, red-eye reduction, and autofocusing techniques.

The PowerShot S70 produces beautiful 7.1 megapixel images — one of the highest resolutions of any camera in its class. We loved the S70’s ability to capture skin tones, fine fabric details, and the particulars of distant objects. It even shoots in RAW mode.

Are there limitations to using the S70? Sure. It doesn’t have as many automatic modes as other cameras; we noticed some purple fringing around the edges of bright white objects; and 10 fps makes for pretty choppy video. But these are nits. If you’re serious about taking good pictures, it’s hard to beat the PowerShot S70. –Dylan Tweney