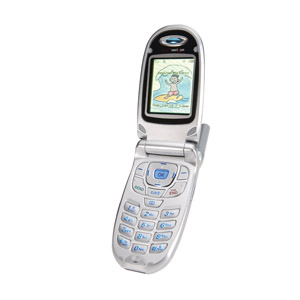 Sometimes, simplicity wins the day. While other phones seek the prize for the slimmest profile, the lightest weight, the biggest LCD, or the loudest ring tone, LG’s VX6100 succeeds by offering a straightforward set of useful features in a sleek, if unremarkable, package. Sure, it’s not going turn heads at your high-school reunion the way a Motorola Razr or a nice orange 2005 Lotus Elise would. But the LG VX6100 has enough panache that you can hold your head up, and you’ll have the added benefit of actually being able to use the phone for conversation.

Like many other LG phones, the VX6100 is a sleek, compact clamshell in four shades of silver and gray plastic. The overall appearance is attractive, although not particularly original. Open the clamshell, and a bright, 160 x 128-pixel LCD display reveals itself. While not terribly large, the display is crisp and usable.

Sound quality from the VX6100 is exceptionally good, both to your ears and to those you’re talking to. Open, the phone fits comfortably in the hand and against the head. The VX6100 includes a speakerphone, but unfortunately the speaker is underpowered and the microphone not particularly adept. Road noise alone makes it useless for hands-free chatting while driving, but if you want to walk around holding your phone at arm’s length and yelling into it like a construction boss on a New Jersey worksite, this speakerphone will fit the bill. Voice-activated dialing also works pretty well; you can use it to enter basic commands (say “contacts” to see your list of contacts) or to dial phone numbers, digit by carefully enunciated digit.

A camera integrated into the phone’s backside features an unusual sliding lens cover with a tiny, convex self-portrait mirror mounted on top it. Unfortunately, that means opening the lens simultaneously plants a big, smudgy thumbprint on the mirror. You can also use the phone’s external, monochrome LCD as a real-time image monitor for self-portraits. It’s low-res but does the trick. Annoyingly, opening the lens cover doesn’t automatically switch the phone into camera mode; you need to press and hold the camera button on the phone’s flank.

The VX6100 offers digital zoom, but don’t count on using it for zeroing in on distant subjects. With images measuring just 640 x 480 pixels at the highest resolution, there aren’t a lot of pixels to begin with, and digital zoom degrades picture quality further. Even without the zoom, image quality is about what you’d expect from a low-end camera phone: middling. A built-in “flash” (really just a tiny, white LED) does little to illuminate your subject unless you’re in intimate circumstances, such as standing a foot or two away in a very dark room.

The VX6100 is no standout when it comes to web browsing. It’s limited by the size of its screen and the slowness of its data connection (forget about 3G; the VX6100 can handle only 1xRTT connections, which average 60Kbps to 80Kbps). The browser reformats text-heavy websites intelligently, although other sites (such as Mobile PC’s) all but disappear under a long vertical column of oddly resized graphics. The VX6100 does better with mobile-optimized sites within Verizon’s default menus. You can enter any URL manually, but this feature is well hidden underneath the browser’s Search menu.

Ultimately, the VX6100’s camera and data features are merely obligatory extras; what this phone does best is voice. Despite some interface hiccups, the folks at LG have put together a capable and reliable phone — more power to them. -Dylan Tweney