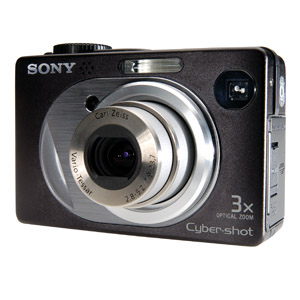 Flexibility and ease of use are not mutually exclusive, though most camera makers don’t know that. You shouldn’t have to choose between pocket point-and-shoot cameras and larger, bulkier, and complicated models that let you make manual adjustments to ensure the perfect shot. It’s a bogus trade-off: There’s no reason camera manufacturers can’t let you have it both ways. The Sony Cyber-shot DSC-W1 is proof.

With a respectable 5.1 megapixels, 3x optical zoom, and a speedy shutter (0.3-second lag on the first shot, and 2.1 seconds between shots), the DSC-W1 has solid assets to begin with. The interface is uncluttered and straightforward, with menu and zoom controls on the back and a mode dial encircling the shutter button. The dial lets you easily switch between fully automatic, semiautomatic, fully manual, movie mode, or any of several preset modes. In burst mode, it will shoot up to nine frames in eight seconds — or put it in multiburst mode to fire off a machine-gun-like flurry of 16 frames in one second.

The DSC-W1 is available in an impressive black metal body with silver trim, which makes it look a lot more like a film camera than the flimsy, plastic, silver-tinted toys that most companies have been churning out for the past half-decade. Apart from its panache, the black color has another benefit: It’s a little less conspicuous than a silver camera when you hold it up to take your shot, so your subjects may be less self-conscious. Unfortunately, the black model is harder to find from retailers than an all-silver model that is otherwise identical.

By the specs, the DSC-W1 is not much bigger or heavier than a Canon S500 Digital Elph, although it feels more solid, and its slightly protruding lens accessory ring means the camera won’t slip into your pocket quite as easily as the Elph. That ring lets you add on wide-angle or telephoto adapters, also available from Sony.

In fully automatic mode, the camera consistently delivers great shots, yet it offers a full complement of manual adjustments via on-screen menus for more zealous photographers. Image quality is outstanding, with lots of detail, excellent color, and good performance indoors and out, although the W1 struggles a bit with low-light, flashless photos. Color fidelity is generally good, but reds and pinks occasionally appear washed out.

This camera’s only real drawback, and it’s a slight one, is that the zoom control is awkwardly placed. It’s difficult to work this control while keeping a finger on the shutter button, unless you’re holding the camera with two hands. We would have preferred a control further to the left — or a rocker switch just forward of the shutter button. Also, the camera’s reliance on expensive Memory Stick media is an unavoidable annoyance, given its maker. But these are minor quibbles. Overall, we’re astonished by how well this camera satisfies both point-and-shooters and aspiring amateur shutterbugs. -Dylan Tweney