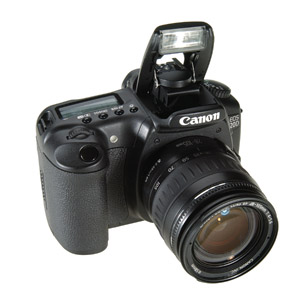 Film-camera snobs, cower in fear. The Canon EOS 20D is a shot across the bow of your beloved 35mm camera. More than that: It’s the first digital camera we’ve tested that has the mettle to go head-to-head with high-end film cameras and come out on top.

Make no mistake: This camera is for serious photographers. Holding the 20D’s 2-pound black bulk in your hands is enough to make you feel like a pro. Unlike virtually every other digicam, the 20D has plenty of steel and magnesium alloy in its construction, giving it a sturdy, retro heft. Plus, it accepts any EF-compatible lens; we tested it with a Canon 28-105mm zoom lens with great results.

The shutter releases with an unmistakable click — the 20D is a true single-lens-reflex camera, and its internal mirror slaps up loudly when you shoot, making stealthy shots impossible but adding mightily to its professional feel. As with other SLRs, you need to look through the viewfinder to shoot, an inconvenience if you’ve gotten used to holding your camera at arm’s length. But it’s a welcome trade-off if you value the visual accuracy of a true optical viewfinder.

The 20D’s shutter is phenomenally responsive. Its 0.3-second shutter lag is fast, and the 0.7-second shot-to-shot recovery time is the speediest we’ve seen. In practice, you’ll hardly notice the lag, and if you prefocus, shots are truly instantaneous. Set the camera to continuous shooting mode and prepare to be amazed: The Canon 20D shoots an astounding 3.9 frames per second for 10 seconds or more, which is far and away the best burst-mode performance we’ve seen — sports photographers, rejoice! And the quality of the images is second to none, with rich detail and accurate colors.

The Canon EOS 20D is replete with features to satisfy creative shooters. In addition to its preset modes (portrait, landscape, macro, and so on) the 20D gives you total control over exposure time, aperture, focus, white balance, ISO film speed equivalent, flash compensation, and exposure metering modes. You control most of these settings by pressing a button and then rotating one of two control dials (one right is behind the shutter button; the other is on the back of the camera). It’s a bit tricky to figure out at first, but once you get the hang of it, you can make adjustments rapidly and accurately.

The 20D shoots high-quality JPEG or unconverted RAW images at resolutions up to 3,504 x 2,336 pixels; you can also set it to record JPEG and RAW images simultaneously. You’ll need to use the included EOS Viewer Utility to download and view RAW images, though. If you’re a pro, you’ll love the RAW format, though enthusiasts will be perfectly happy with the JPEG results.

All this power comes at the expense of size and weight. The 20D won’t come anywhere near fitting in a pocket, and it won’t sit comfortably in a laptop bag, either. No, this camera practically demands its own bag. And while the $1,599 price tag (with an 18-55mm zoom lens) is low compared with professional-grade digital SLRs, it is steeper than other entry-level digital SLRs, such as Nikon’s much-vaunted 6.1-megapixel D70 ($1,299, with a more capable 18-70mm lens).

Do you really need the extra two megapixels, the solidly built body, and the knowledge that you’re shooting with one of the most responsive cameras available to ordinary mortals? Probably not. But then again, why deny yourself the best? -Dylan Tweney