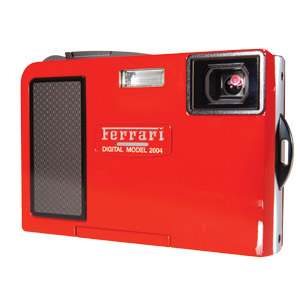 Some brand names transcend price: Rolex. Bulgari. Trojan. And some, like Ferrari, have a value that can easily be computed. In the case of the Olympus-built Ferrari Digital Model 2004, that value is about $400 — the premium you’d pay over a comparable 3.2-megapixel camera with more prosaic styling and branding.

That’s not to say that the Ferrari Digital is pure empty fashion. Far from it. The camera is replete with elegant touches, such as an enormous 2.4-inch LCD and a clever rubber scroll wheel in the upper right corner.

And there’s no denying that this camera is slim and sexy. The Ferrari Digital practically oozes style, and it’s a surefire attention-getter. We love its red chassis, its charcoal-gray, faux-carbon-fiber trim, and the fact that the Ferrari logos on the body are restrained and — almost — tasteful. When you’re buying a brand that stands for obscene wealth, you don’t want to hide your displays of excess under a bushel, after all. Even the packaging is over the top, with a series of nested black, velvet-lined boxes and a certificate of authenticity. Pirates be damned!

As a camera, the Ferrari Digital is competent, producing images that are above average for a 3.2-megapixel shooter. The optics are entirely self-contained, so there’s no protruding lens to worry about, even when zooming in and out. And the controls are pleasantly few in number and simple to operate. The scroll wheel, used for navigating through control menus, is an especially nice touch. Too bad it doesn’t also double as a zoom control.

The LCD is one of the largest we’ve seen on any camera, but its refresh rate is slow, so the image appears blurred and jerky with any kind of moving subject. Startup time is acceptably fast, at four seconds (accompanied, naturally, by the sound of a miniature Ferrari Formula 1 racer zooming by), and the camera’s 0.6-second shutter lag and 2.4-second shot-to-shot recovery times are decent.

In all, though, this camera delivers less than its big-money looks promise. For $700, we’d hoped for something in the 5-megapixel range. A better LCD wouldn’t hurt, and how about that chintzy 16MB xD card? At least you get a full tank of gas when you drive a real Ferrari off the lot. -Dylan Tweney