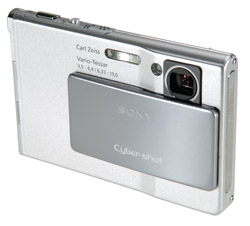 Sony’s slimmest Cyber-shot, the DSC-T7, is more than just a camera. It’s skinny enough that you could use it to shim up a wobbly kitchen table or to wedge a door shut. Or you could weld on a little extra hardware and wear it as a belt buckle.

The DSC-T7’s body is barely 0.4 inches thick, making it easily the thinnest digital camera we’ve seen. A sliding lens cover increases the overall thickness to a bit more than half an inch. To turn the camera on, just slide this cover down. If you’re a hipster, you’ll do it using one hand, like a street tough flicking open a pocketknife. Shooting one-handed is similarly easy, thanks to a simple zoom control and shutter button on top.

To change among the nine preset shooting modes or to adjust the camera’s settings, you use the menu button plus a five-way controller on the back face. That’s it — there are almost no other buttons to worry about on this camera. If you’ve got big fingers, you might find the DSC-T7 a bit awkward to manipulate, but otherwise this is one simple point-and-shoot camera.

The DSC-T7 captures 5-megapixel stills or 640 x 480-pixel video with sound. Although the videos are ostensibly 30 frames per second, their quality falls far short of what you’d expect. This camera’s movies are as jerky and jumpy as an old Charlie Chaplin flick, except blurrier, and without the piano soundtrack. You can’t zoom while filming, and the focus has a disturbing tendency to drift in and out. If you want to feel nostalgic for last weekend’s pool party, these old-timey videos are just the ticket.

No matter: The DSC-T7’s best and highest purpose is taking still images, and it does that like a natural. And unlike other supercompact cameras, the DSC-T7 has a 3x optical zoom, so you won’t sacrifice image quality when you zero in on distant celebrities at a movie premiere.

Pictures look very good in a variety of lighting conditions, from low light to full sunlight, although the camera has the most trouble with very dark and very bright scenes. The flash is adequate, despite its small size, and yet it won’t blind your subjects when you point it at them. The clarity score of 2.3 is better than any other ultracompact but the Fuji FinePix F450, so you aren’t trading image quality for portability with the DSC-T7.

The DSC-T7 uses Sony’s somewhat expensive Memory Stick Duo media and lacks standard cable connectors (you must use the included dongle to connect the camera to a computer or to a TV for image playback). Also, its onscreen menus can be cryptic, and the manual is confusingly organized. But these are small prices to pay for having the skinniest camera on the block. With cameras, as in Hollywood, the thinnest starlets get the best parts — and get to go to the most exotic locations. We predict a brilliant career for this streamlined newcomer. -Dylan Tweney

Xena has a moon.