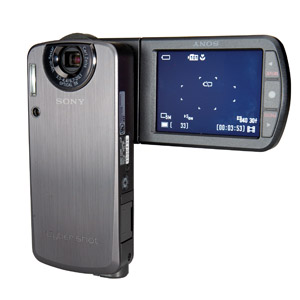 Imagine that your digital camera developed cell phone envy and tried to transform itself into a hip, nightclubbing swivel-phone from Virgin Mobile. Next imagine that it fell in love with a Wall Street banker and decided to put on a sophisticated, charcoal-black finish reminiscent of a chunk of hematite. Then pretend that it sprouted a bunch of camcorder controls and features in an effort to appeal to soccer moms.

The conflicted, neurotic gadget that would result from this tortuous journey might look a lot like the Sony DSC-M1 Cyber-shot. It’s got enough startling innovations that we gave it a “Most Innovative Product” award at the Consumer Electronics Show in January. And, indeed, the DSC-M1 shows a lot of promise. Despite that scintillating debut, however, its innovations don’t quite gel into a well-adjusted product.

The first quirk of the DSC-M1 you notice is its unusual orientation. Instead of holding it sideways, like most digital cameras, you hold it vertically, like a camera phone. Swiveling the generously sized 2.4-inch LCD to the left turns the camera on; you can then rotate the panel vertically to accommodate shots from various angles. Closing the screen both protects the LCD from damage and powers the camera off.

Opening the screen also reveals the camera’s controls: a bank of buttons and switches that could make a 747 cockpit feel sparse. Unique to the DSC-M1 are its dual shutter buttons: one for snapping 5-megapixel still images; the other for video recording. (You can also shoot photos and video using buttons on the LCD panel.) Between the two sits a vertical zoom switch.

The lens is one of this camera’s biggest disappointments. It zooms slowly and smoothly, which is fine for video but is painstakingly sluggish when you want to zero in on a detail for a quick shot. And it’s only got the 3x zoom typical of a still camera, rather than the 10x or greater optical zoom often found on camcorders. In the end, it’s neither quick nor powerful enough to get the kinds of shots you want. Worse yet, many still shots were out of focus — a problem made especially apparent by the high resolution of the images.

On the plus side, the DSC-M1 records fair-quality videos at an impressive 640 x 480 pixels and 30 frames per second. In other tiny camcorders, MPEG-4 encoding usually results in crummy video quality. Not so with the Sony; its video quality is pretty good, considering the camera’s size. And the compression rates are good: A 512MB Memory Stick Duo (or Duo Pro) will hold about 22 minutes of top-quality video, or more than an hour at 320 x 240 pixels.

The Sony DSC-M1 also sports a nifty “hybrid” mode that you can use to capture short video clips together with full-size still photos. It’s constantly buffering video, so when you press the photo shutter button, the camera snaps a photo and saves the preceding five seconds of low-quality (320 x 240-pixel, 15 fps) video, plus the following three seconds, providing a minimovie that shows what happened before and after you took your shot. It’s a fun feature, though it runs the batteries down rather quickly.

Unfortunately, the low quality of its images plus the DSC-M1’s rather chunky body mean that it’s less than ideal as a still camera. And while fairly portable, it’s more expensive than some full-blown camcorders; it relies on expensive Memory Stick media; and you can’t connect it to your computer without included cradle. Unless you’ve simply fallen in love with its unusual good looks, we say stay away: The DSC-M1 needs time to sort out some personal issues. -Dylan Tweney