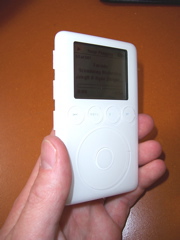 I took apart a nonfunctioning 15GB iPod that had been hanging around the Mobile PC offices for the past few months. I pretty much just went right in, using a pocketknife to create a gap between the front (white) plastic and the metal back, which are joined together extremely tightly; once I’d created enough of a gap I worked a small standard screwdriver in and wedged the thing open. Reseated all the connectors, put it back together, and it worked! Mostly. In the process, I learned a number of things:

I’ve posted a few pictures of the iPod disassembly for your edification & entertainment — including a slightly blurry shot showing the hole I stupidly punched in that cable. D’oh!